Why your vote counts more than you think 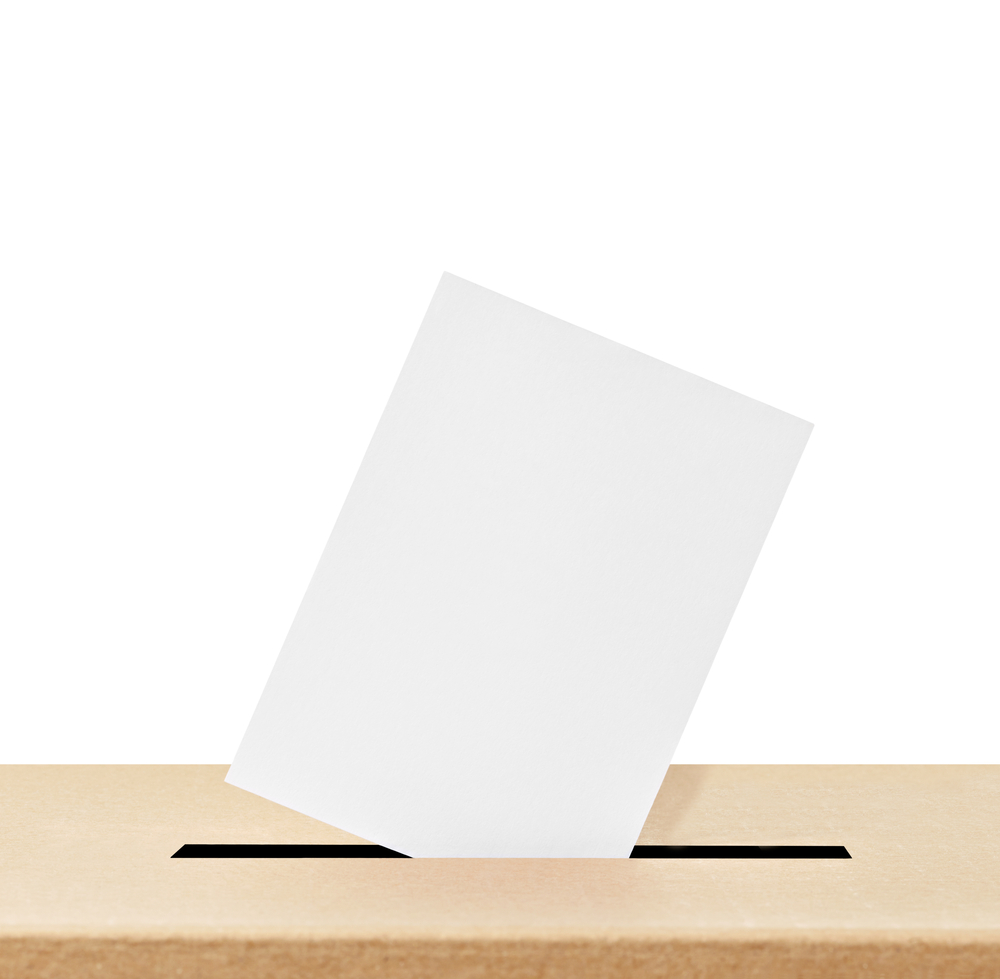 The 2018 Vancouver municipal election was held on October 20, 2018. There were 448,332 registered voters in Vancouver at that time, and only 176,450 votes were cast. This amounts to a voter turnout of just 39.36%, down from 43.4% in 2014. We drill deeper to show how important voting in municipal elections is to impact all of our daily lives.
We all are aware of when our federal and provincial politicians commence their electoral campaigns.  Large-scale efforts, covered extensively by media, with a small number of identified mainstream candidates and broad policies, albeit still ambiguous. There is usually a sense of the importance of our daily lives, our tax rates, child care, education, healthcare, national/global climate policy etc.  Important things certainly.
In reality, though, it is municipal candidates and policies which have a larger effect on our daily lives.  Roads, zoning, City & school programs, garbage/recycling, policing, by-laws and housing, just to name a few.  As we have also seen in recent years, particularly in Vancouver, City Council has readily taken on many costs and aspects that actually should be provincial and federal concerns.
Of consideration then, is do our municipal elected members really represent the majority of voters.  Are the sheer number and ambiguity of candidates and political parties overwhelming for voters, who in turn, choose to either not participate in voting, or simply cast a vote for candidates we may have "heard of", but have no understanding of their policy or track record? We believe both of these practices are common, and for the 2022 Municipal elections, we hope to do all we can to make your choices easier and clearer as best we can.
As a start, let's talk about the 2018 Vancouver Municipal election, which elected the current Mayor and Council.
Kennedy Stewart won the mayoral race by only 957 votes. Stewart's vote total was the least any mayoral candidate received in more than 20 years. He won the mayor's seat with the support of only 11.09% of all eligible, registered voters in Vancouver.
As for City Council, the NPA won five of the 10 seats, with Rebecca Bligh, Melissa De Genova, Lisa Dominato, Colleen Hardwick, and Sarah Kirby-Yung elected. Three Green candidates - Adriane Carr, Pete Fry and Michael Wiebe - secured seats on council. The remaining two council seats were captured by COPE's Jean Swanson and OneCity's Christine Boyle.
For the City Councillors, the tables below show the full results for the election with their vote totals and % shares.  As you can see,  City Councillor with the highest total (Adriane Carr), was just under 16% of eligible voters to win a seat, all the rest were a lower % of voters: 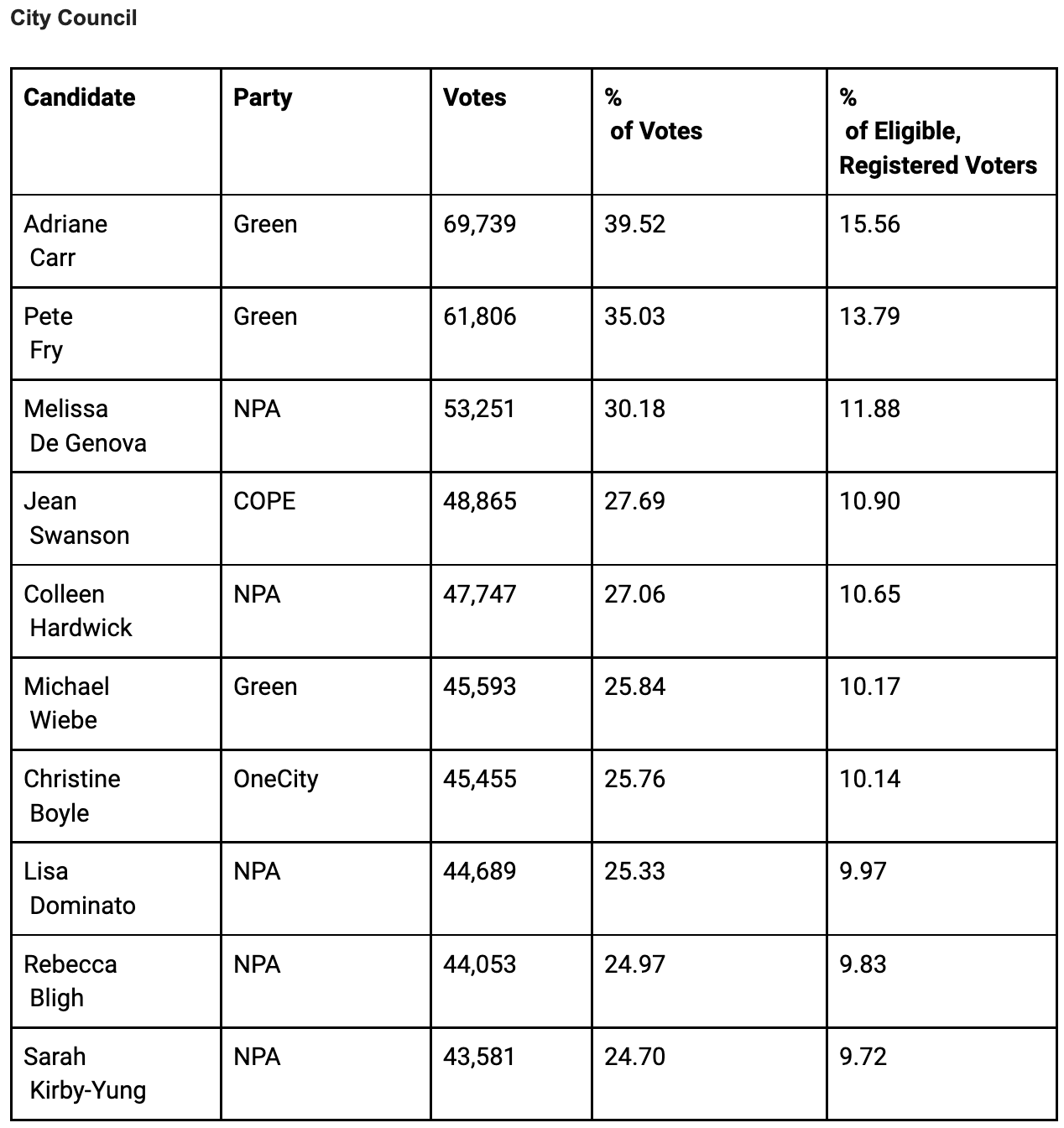 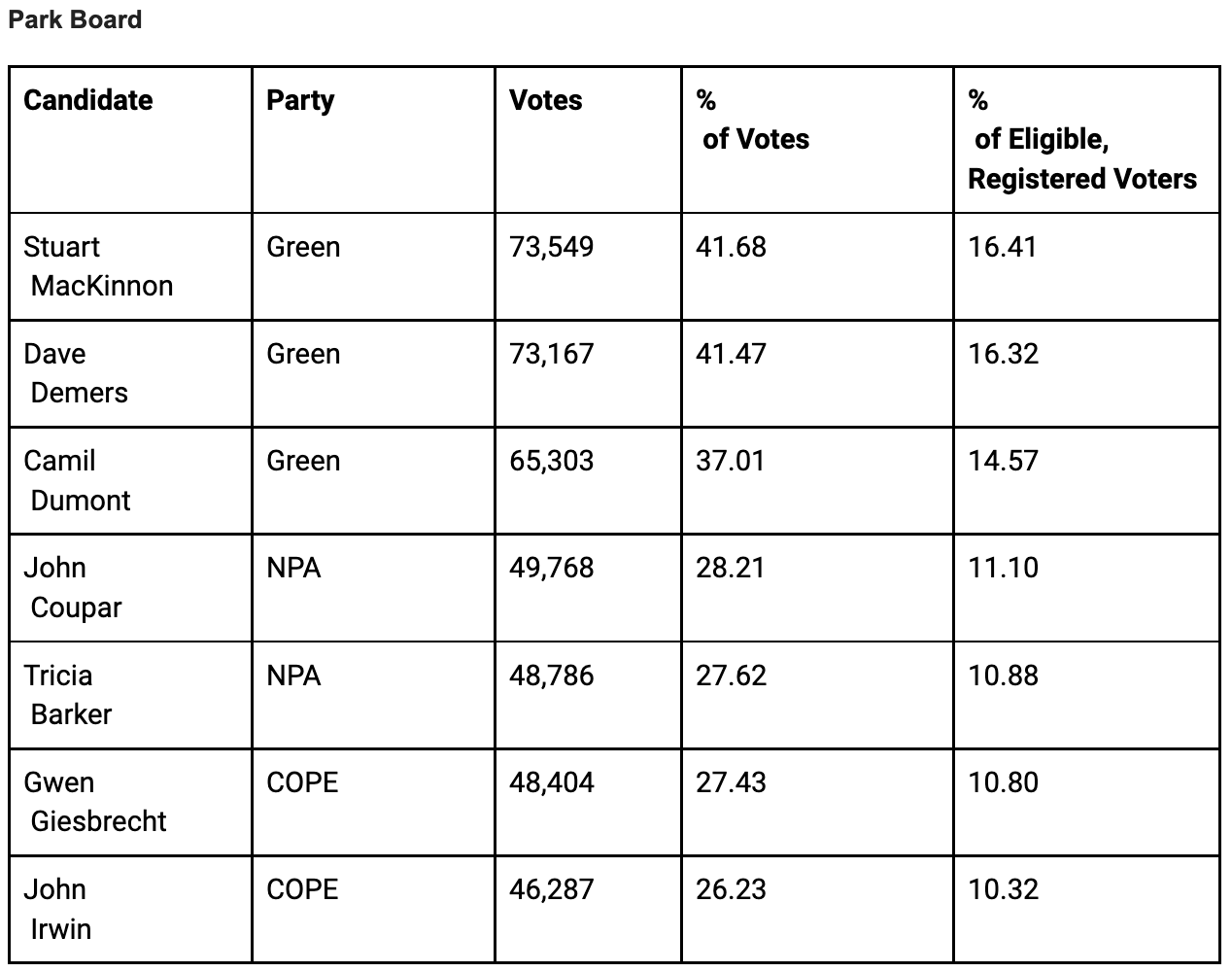 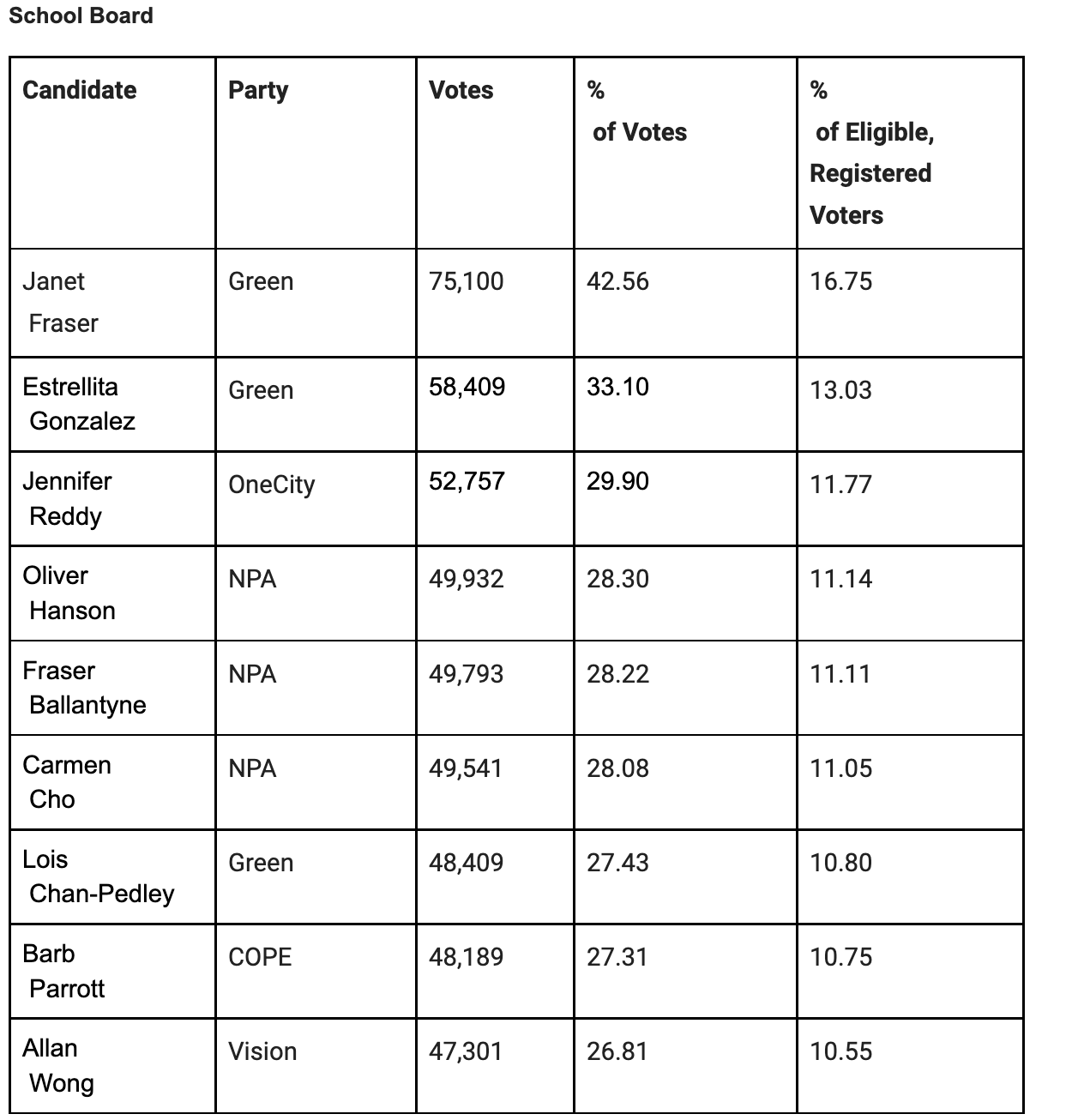 Voting in a municipal election is a small act. However, your vote can have a massive impact on you and your community.

Moreover, with voter turnout often being low in municipal elections, and the voting margins tight between candidates, your vote can actually make even more of a difference than you imagine. By educating friends, family and others to do the same, this impact becomes quickly amplified. Significantly greater impact can be achieved than in provincial and federal elections.

Kitsilano Coalition will be talking to municipal candidates who wish to engage, and we will be sharing with you what we learn about them and their positions on campaign issues, including housing, Mental Health and addiction and homelessness and Public Safety. We strive to provide clarity on candidates, who have the understanding, and credibility and are committed to changing how things are done in Vancouver. We are not aligned to any single party but will provide candidates who we think fit the bill, and pass along election info provided to us from all parties who provide it, to help you make an informed decision when casting your ballot in the upcoming election. Stay tuned!